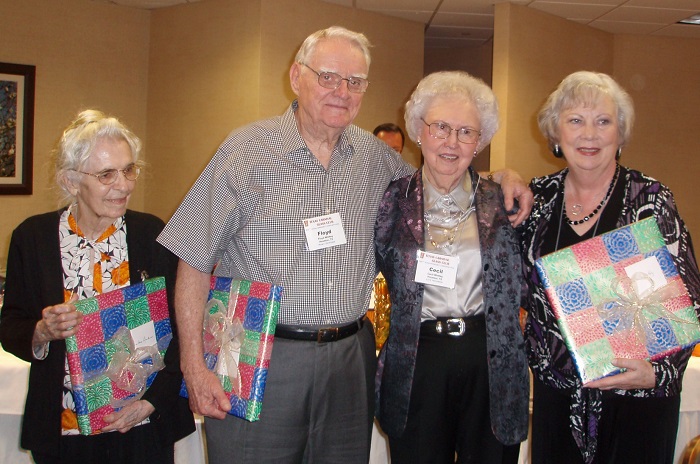 Pictured in the photo are the founding members of the club who were still living at the time. These members were presented with ceramic plates procured by Ann and Tom Bumpass to show a hand-painted sketch of each of the four members. Pictured in the photo from left to right are Jane Dinkins (1917-2013), Floyd Whitley, Cecil Whitley (1924-2010), and LaNell (Says) Roy.

The plate below, from left to right, shows LaNell, Cecil, Floyd, and Jane. LaNell collects dolls so she is holding a doll. Cecil collects tumblers. Floyd is pulling out his wallet to pay for club activities. Jane is holding her notebook as she was the club's research editor. 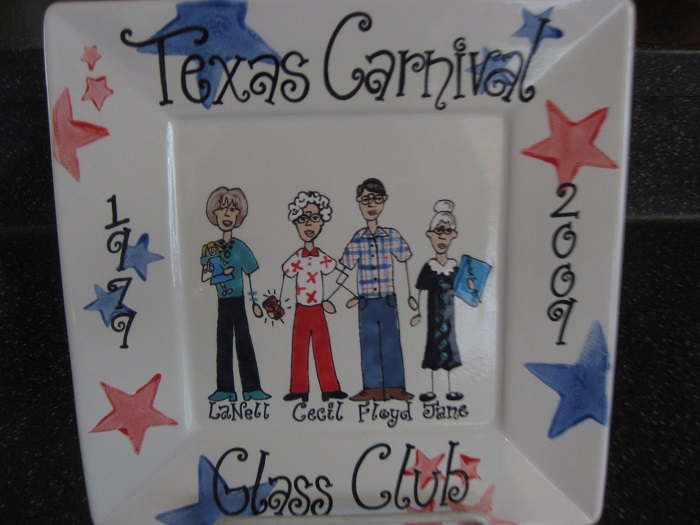 In September, 2013, TCGC club secretary, Sandy Sage, contacted us and asked if we would write a history of the beginnings of the Texas Carnival Glass Club (TCGC) for the club website.

We looked through numerous boxes of Jane Dinkins research material and the only mention of TCGC’s existence was by O. Joe Olson in a December 1981 issue of “News and Views – Carnival Glass.” Mr. Olson mentioned that the club known as The Texas Carnival Society was holding auctions during their monthly meetings to try and raise money for the club’s coffers. Each member could bring up to [3] pieces to the meetings and they would be auctioned off to the highest bidder. The club received 10% of the selling price of each piece sold.

We were still in need of more information for our article so the decision was made to go straight to the source, Floyd Whitley. A call to Floyd yielded the information we needed about the early happenings of the club. Floyd said that he had all of the early newsletters and had turned them over to his son, Tommy Whitley.

A call to Tommy Whitley led to his willingness to loan us the original newsletters. Upon receiving the box of newsletters the very first one that caught our eye was the Texas Carnival Club – Volume 1- Issue 1, dated March 1979, the very first newsletter put out by the new carnival glass club!

The officers were listed on the front page as being: President Floyd Whitley, Vice-President Gerden Clark, Treasurer Roy Simms, and Secretary Iris Herring. The first issue began with the President’s Message. The timelessness of that message is as appropriate and important today as it was some 34+ years ago and President Floyd Whitley’s inaugural message is included just as it appeared in that issue nearly 35 years ago:

“For some time we have been interested in forming a Carnival Glass Club in Texas. Thanks to the efforts of Jody and Mitch Mitchell, who have recently moved here from California, the Club is now a reality. The experience and involvement that Jody and Mitch enjoyed in a California Club has helped us to set the wheels in motion for our own organization, and the first meeting was held in the Mitchell home in February with 26 members present.

It is hoped that the Club will afford the opportunity for Texas Carnival Glass enthusiasts to meet and talk about glass. The National events that we enjoy so much do not occur often enough and may be difficult or impossible for some to attend.

Meeting new people who are interested in Carnival Glass, discussing and learning more about our glass are the prime purposes of the new organization. Carnival Glass collectors all over the country will be welcome to the club membership. I would hope that a diligent membership drive by ALL members of our club will provide enough members from all parts of this area to make the regional meeting concept a reality.”

As a founder of the club, Floyd’s first President’s message has been the standard borne by the Texas Club officers and members since its inception and continues to be the reason for our club’s existence. The foresight of our founders had provided the precepts that are the glue that is the basis that successfully holds together the very fiber of any successful carnival association.

Inside the cover sheet, Secretary Iris Herring reported there were 27 attendees at the first meeting; dues were set at $5 per family per year; Jane Dinkins was named Editor; and Jody Mitchell was elected as Research Editor.

No bylaws were set but two rules were adopted:

We hope you have enjoyed this brief look into the beginning of the Texas Carnival Glass Club. Our thanks to Tommy Whitley for allowing us to borrow these precious memories of the beginnings of our club. We owe a lot to our founding members for taking such bold steps in establishing our club and entrusting its continuance to capable leadership that rose to the occasion in the ensuing years.